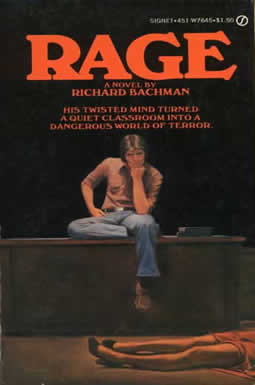 When you throw a rock into the ocean, it creates ripples. If you skim it, a skill my brother possesses like you can’t imagine (he gets eight or ten skips on a single rock sometimes), there are lots of small, fast indentations in the water.

If you heave a huge boulder in, the splash–and possible impacts–are larger.

Both rock-skipping and boulder-hurling are kind of cool to look at, to contemplate, to consider the possible effects on the oceanic ecosystem beneath.

Which leads me to Stephen King’s short novel Rage, which he wrote as his malevolent pseudonym, Richard Bachman … and which is now out of print at his request.

I read Rage a long time ago, and rereading it had been on my agenda literally for years, but it was one of those things I never got around to doing. Then, it was out of print–the other works in that omnibus known as The Bachman Books–The Long Walk, Roadwork, and The Running Man–have been republished as individual books under King’s own moniker, but Rage was slightly more elusive.

If you don’t know the basic premise to Rage, it involves a clearly disturbed high school senior named Charlie Decker who takes his Algebra II class hostage, killing two teachers in the process and keeping his classmates subdued (at least at first …) with the gun he smuggled in.

Yeah, it’s disturbing. Yeah, I get why King felt some guilt following the association of the book with a number of school shootings, most notably the 1997 shooting at Kentucky’s Heath High School when senior Michael Carneal fired a .22 pistol at a youth prayer group, killing three girls and injuring five others. A copy of Rage was apparently found in Carneal’s locker.

Here’s the thing, though …

I can’t imagine that I’m making some sort of negative judgment on Stephen King, who I think is pretty much one of the most amazing human beings on the planet, but … well, yeah.

Because Rage is an incredible book.

King will go down in history as a literary master of characterization. He doesn’t pull punches, which is one of the reasons he’s such a genius. His characters are not always nice people, and they always–ALWAYS–have flaws. They’re real, people we can all imagine knowing in reality.

Yeah, Charlie Decker is off his rocker.

However, he didn’t get there by accident.

His abusive father, who mistreated him physically throughout his childhood and went after him with a hatchet with murderous intent, who made a comment on a hunting trip that Charlie overheard about cutting off his mother’s nose if he ever caught her with another man, unquestionably played a role.

As did his mother, who took him into her sewing room and comforted him with hot chocolate to mitigate his father throwing him to the ground with all his strength after he broke a bunch of storm windows (which seemed like a good idea to a three-year-old Charlie), who forced him to wear a formal suit to the birthday party of a girl he was crushing on because she wanted to make a good impression on the young lady’s mother.

And let’s not forget the science teacher that Charlie almost killed with a socket wrench shortly before the hostage-taking incident. Yeah, that’s the teacher that forced Charlie to the blackboard to solve a complicated chemical equation then yelled at the young man repeatedly when he couldn’t get it right, who berated him in front of the class …

Charlie had just returned to school following his suspension for the horrible beating which nearly resulted in the death of the science teacher when the events of the story begin.

Now, I’m not defending Charlie Decker, nor am I trying to portray him in any sort of heroic terms. The kid was totally off the deep end.

However, consider the life lessons inherent in the totally unhealthy relationships between Charlie and his parents, the reminder of how valuable sensitivity is for teachers, not to mention others in positions of power. It’s … well, just striking.

I was also stricken almost to the point of tears at moments of beauty that showed through very early in the book.
A girl I didn’t know passed me on the second-floor landing, a pimply, ugly girl wearing big horn-rimmed glasses and carrying a clutch of secretarial-type books. On impulse I turned around and looked after her. Yes; yes. From the back she might have been Miss America. It was wonderful.
Tell me that’s not brilliant writing, a truly remarkable sentiment that can really make you think about things differently. The book is full of gems like that, and it’s a shame that the stigma that surrounds school shootings has taken away a work of literature that contains not just brilliant writing but also an in-depth look into a disturbed mind and seeing that, like all of us, it is still capable of seeing good in the world.

I don’t want to spoil the story overmuch, but the gist is that Charlie somehow gets his classmates to spill their souls, to come to terms with their own personal demons in the public forum he’s somehow created inside the classroom he’s co-opted. Surely his ability to make a safe environment for his classmates while holding a gun–albeit loosely–on them is amazing.

Obviously, there’s more than a bit of Stockholm Syndrome alluded to throughout the course of the novel, not to mention Charlie gaining the upper hand in figures of authority ranging from school officials to the police getting him hard-core points with this classmates.

Consider these stories, though, that come to light in a kind of warped impromptu group therapy session that springs up while the body of a teacher goes into rigor mortis on the floor …

* A girl publicly admits that her mother is a whore … and she loves her in spite of it.

* The quintessential “nice girl” losing her virginity to the Big Man On Campus, finding it wasn’t all it was cracked up to be, and making it right by hooking up with a dirty, dangerous hoodlum at a local roller skating rink

Issues for the ages, seriously. These were worthy of conversation when the book was originally published in 1977 (when, by the way, I was not even a year old), and they are still relevant today … perhaps even more so when you put the very fact of their longevity into the conversation.

Even the induced breakdown of the aforementioned BMOC by his classmates is an opportunity for discussions of huge portent by a huge population, young and old alike–this is a bridge-gapper if I’ve ever seen one … and, as a high school English teacher, I’ve seen a lot.

I love books, which any regular reader of this blog knows. I love to lose myself in books, and I love to discuss them. If those discussions were kept to “safe” topics, it would be limiting.

The best conversations are never based in mundane topics.

You talk about why the Komen Foundation tried to stop their annual $600,000 donation to Planned Parenthood that was used exclusively for breast cancer screening just because 8% of Planned Parenthood’s overall service involve abortions. You talk about the banning of The Adventures of Huckleberry Finn or To Kill a Mockingbird . You debate the so-called Ground Zero Mosque.

I mean, that’s how you learn. That’s how you grow. If all of my friends agreed with everything I say, I’d be pretty bored.

And that’s how I feel about books. The best books are the ones that bring out a visceral reaction in me, ones that make me think and want to engage in discourse with others to explore the human condition.

Rage was a perfect book for opening up the doors to conversations that are in the “let’s not talk about it” zone, and that makes me both sad and scared.

As a final note, Marilyn Manson was interviewed by Michael Moore during filming of Bowling for Columbine. Manson, who was tangentially blamed for influencing the unspeakable actions of Eric Harris and Dylan Klebold, had this to say when asked what he would say to the Columbine kids and community if given the chance.

“I wouldn’t say a single word to them–I would listen to what they have to say, and that’s what no one did.”

Conversations about school shootings are a veritable minefield, and I don’t envy artists ranging from Marilyn Manson to Stephen King for feeling the pain.

I just think it’s a shame that the opportunities afforded by Rage have been taken off the table … because not talking about it, not thinking about it, avoiding the fact that there are potential Charlie Deckers in schools all over the country is definitely a step backward.